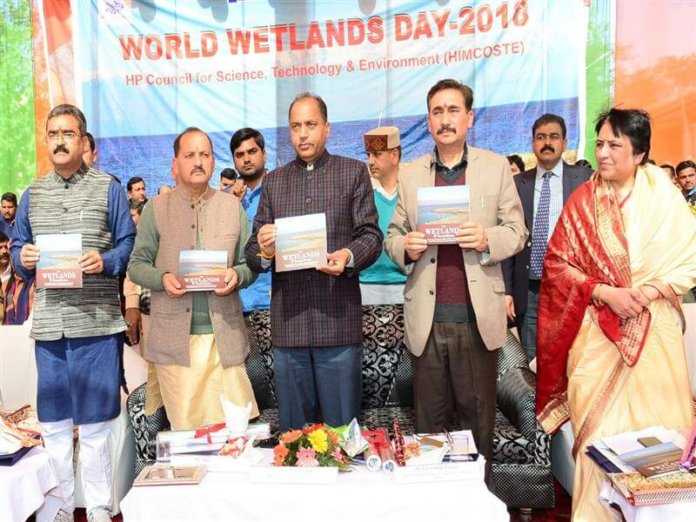 Jawali – Himachal Pradesh encompasses a wide variety of wetlands, spread in various ecological zones which apart from biodiversity treasures were source of livelihood for the local community and have immense aesthetic and tourism values.

This was stated by Chief Minister Shri Jai Ram Thakur while presiding over the state level wetland day at Jawali in Kangra district today.

He exhorted the people to participate actively to conserve and assist restore wetlands as they help reduce flooding, replenish drinking water, filter- waste, provide urban green spaces, and were a source of livelihoods. Urban wetlands should be integrated into a city’s sustainable future planning and development. The visitors should also be sensitised about littering, through Information, Education and communication programmes.

The core objective should be to conserve and help restoration of wetlands and involve locals at planning, implementation and monitoring level.

The International theme for World Wetlands Day 2018 is ‘ Wetlands for a Sustainable Urban Future’.

The Chief Minister said that there were three wetland sites in Himachal viz: Ramsar wetland sites as Pong Dam in Kangra, Renuka in Sirmaur and Chandertaal in Lahaul and Spiti.

Two more sites Rewalsar in Mandi district and Khajjiar in Chamba district have also been included by the Union Ministry of Environment and Climate change, for its conservation and management, said CM.

He said that the Ramsar wet land at Pong Dam has become a famous bird sanctuary which had witnessed an increases in number of migratory birds mostly from Siberia, Central Asia, Russia and trans-himalayan region in Tibet.

He said that there was tremendous Tourism potential in the state. Conserving bio-diversity, flora and fauna of the state will give boost to tourism and attract tourists. Himachal has been a home for migratory birds as could be seen from increase in number of species of waterfowls in wetlands.

The Chief Minister also released a booklet ‘Major Wetlands of Himachal Pradesh’ and a calendar of Pong Wetland. He also congratulated children for making beautiful paintings on wetland.

He said number of birds visiting Pong Dam this year was 1.10 Lakh as compared to 1.27 lakhs in 2017-18. The reason being quoted is climatic change due to global warming which has affected all the wetlands of India. However the number of species as compared to 93 in 2017-18 has increased to 117 in 2018.

The Chief Minister said behavioural changes of migratory birds need to be studied as well as proper measures should be taken to improve their habitats.

The Himachal Pradesh State Wetland Authority (HPSWA), under the aegis of HP, Council for Science, Technology and Environment is acting as a nodal agency for co-ordination of the Wetland conservation programme in the state with active participation of all stakeholders department.

Additional Chief Secretary Smt. Manisha Nanda while addressing on the occasion gave a detailed account of the Ramsar sites and their importance. She exhorted people to conserve wetlands and wild life habitats, water bodies along with aquatic species.

Scope of Tourism in Mandi