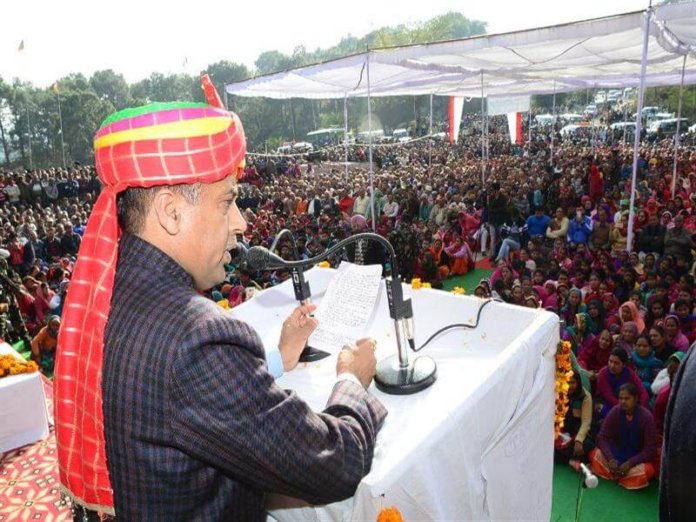 Shimla – Chief Minister Shri Jai Ram Thakur has hailed the Union Budget 2018-19 presented by the Union Finance Minister Shri ArunJaitely at New Delhi today. Terming the Budget as being out and out for the poor, farmers and the most vulnerable sections of the society, Shri Thakur said that the Budget would prove a solid ground for the foundation of a ‘New India’. He said that the Budget was farmers friendly, common citizen friendly, business environment friendly and development friendly, which would add to the ease of living .

While terming the Budget as a historic, Shri Jai Ram Thakur said that the Budget caters to hopes and aspirations of crores of Indian. He said that the ‘Ayushmaan Bharat Scheme’ providing health insurance cover of Rs 5 Lakh to each beneficiary family, would provide insurance cover to over 10 crore poor families. This would thereby benefitting about 50 crore people, he added. He said that this scheme would ensure that to poor were not deprived of best health care facilities. He lauded the decision to open 1.50 lakh Arogya Centre in the country, which would provide better health care facilities to the people nearer to their homes. He also welcomed the announcement made by the Union Finance Minister regarding providing assistance of Rs 500 per month to patient suffering from TB.

Shri Jai Ram Thakur said that the decision to provide 8 crore free LPG connections to rural poor women under the ‘Ujjwala scheme’ would also go a long way in providing much needed relief to the rural poor and also help in environmental conservation. He said that target to provide all Indians their own house by 2022 has also been resolved in the Budget, which was a laudable step. He also welcomed the decision to construct 2 crore toilets in the country in next one year. This would help in visualizing the dream of Swachhat Bharat, he added.

The Chief Minister appreciated the Union Finance Minister for re-iterated the Government’s promise of doubling the income of the farmers by 2022. He said that various additional allocation and funds has been announced for the agriculture sector. He said that with increase in Minimum Support Price (MSP) for crops by one-and-a-half times, support to organic farming, Rs 1,400 crore for food processing sector and liberalisation of agricultural exports are indeed commendable steps. Allocation of Rs. 10,000 crore to fisheries, animal husbandries and related infrastructure, besides Kissan Credit Cards for cattle rearersmake it clear that the budget in true sense wasa Roti-Kapada-Makaan and Kisaan budget, he added.

Shri Jai Ram Thakur also lauded the decision to provide internet facilities one lakh panchayats and said that to give boost to the endeavour of Digital India. In addition 5 lakh WiFi hotspots would be set up in rural areas to provide easy access to internet. He said that this would not only open employment avenues in rural areas to help in making the dream of global village come true.

While hailing the announcement made in the budget regarding allocation of Rs 5.35 lakh crore for construction of over 35,000 km roads in the country under Bharat Mala Project, Shri Thakur said that this would give strengthen road network in the State and give boost to tourism industry. He also hailed the decision to open Eklavya Schools for the Scheduled Tribe population. He said that announcement to formulate new Education Policy for nursery to 12thstandardwas also an appreciable decision. He also lauded the decision to start integrated BEd programme for the teachers, which would help in improving the quality of education.

The Chief Minister also welcomed the announcement to increase the limit of corporate tax from Rs 50 crore to Rs 250 crore. Now companies with turnover uptoRs 250 crore would have to pay 25 per cent tax. This would give a much needed boost to the ‘Ease of doing business’, he said. He also hailed the announcement to contribute 12 per cent in the Employees Provident Fund for three years for the new employees and also welcomed the decision to give standard deduction of Rs 40,000 on the income of employees in lieu of medical and transport reimbursements.

Schools in HP affiliated to HPBOSE