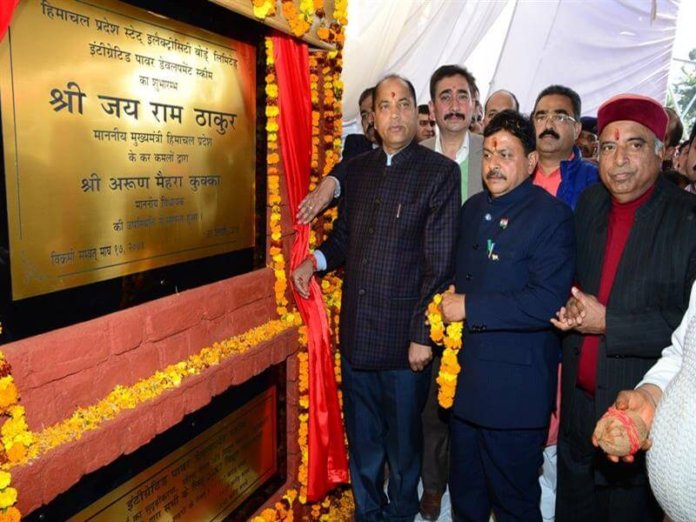 Jawali – Chief Minister Shri Jai Ram Thakur, while addressing a public meeting at Jawali in district Kangra today announced a degree college from next academic session to be opened at Jawali.

He said that adequate budget would be provided for parking near Bus stand at Jawali and asked to prepare budget estimate of the same. He said that possibility would be explored to bring IPH Sub-Division Kotla under IPH Division Jawali, presently at Nurpur as of now. The Chief Minister said that demand pertaining to bring all Primary and Community health centres of Jawali constituency under Block Medical Officer Nagrota Surian will also be reviewed and decision taken thereafter.

He also assured that adequate funds will be earmarked in next budget for roads as mentioned in demand charter. He asked the PWD authorities to prepare estimates for a bridge and metalling of Rajol-Anuhi-Jaangal-Baga road which would be certainly considered in next budget.

He also announced a bridge at Bhed Khud in Kotla Panchayat and Bhalla-Soldha in the same Panchayat for ambulance use. He announced for adequate budget after estimate for Chachian-Harnota Banoli Road.

The Chief Minister assured to fulfil other demands after examining the same.

He directed for preparing detailed project report for Kohladi Bridge.

He said that he believed in doing work and not boasting about it. He thanked people of Kangra for giving huge mandate to the BJP and said that the Government would come upto their expectations at all cost provided people extended their full support as they did during elections.

Referring to the stature of Prime Minister Shri Narendra Modi, the Chief Minister said that he was the most popular world leader and his popularity had spread around the globe.

He said as a gesture of gratitude towards elders the government decided to provide social security pension of Rs, 1250 per month to elderly without any income criteria and reduced the age limit to 70 years from 80, he said.

Lambasting previous Congress government for poor law and order situation he referred to custodial death of one of the witnesses in infamous rape and Murder case of Guddiya. As of today eight police officials were behind the bars when CBI started the probe. He said attempts were made to save culprits, and added that he was sure that Guddiya will get the Justice soon.

We have started 1515 toll free ‘Guddiya’ help line number to keep vigil on atrocities on women, besides we have also launched 1090 Hoshiar Help line number, in name of forest Guard Hoshiar Singh from Janjehli, who was murdered by forest mafia sheltered by Congress. The Hoshiar help line would be monitored by Chief Ministers office to tighten noose around forest mafia, he said. We started Shakti App Button for safety of women which was available on google play store, he said.

Today the Congress leaders were issuing statements that the Government did nothing in one month of their regime said the Chief Minister adding that it seems that they have lack of visibility and farsightedness.

A sum of Rs 5.70 lakhs was presented to the Chief Minister on the occasion by various individuals and organisations towards CM relief fund.

Earlier, the Chief Minister laid foundation stone of Bada Chiched road along with a bridge to be constructed with an outlay of Rs. 4.05 crore at Bada at Trilokpur.