Rewalsar: town a famous for tourism just 24 KM from Mandi in Mandi distt of Himachal Pradesh, it is an important pilgrimage centre for Hindus, Buddhists and Sikhs alike. It is also know as Tresungam Sthali built around a lake held sacred by people of the three faiths. Rewalsar has buddhist monestry, temples & gurudwara around the lake.
Tourism in Rewalsar :
It was from Rewalsar that the great buddhist master Padmasambhava had left for Tibet in the 7th century to propagate the faith. His spirit, it is said rest in the islands of floating reed on the lake. While walking around the lake, one can spot many buddhists fervently turning their prayer wheels. The temple of Naina Devi at a distance of 10 KM from Rewalsar up on the mountain is another attraction, there are 7 sar (pond or small lake) with only 3 having water and other are dried due to global warming. All the sar are lies between Rewalsar and Naina Devi. Many Indian and foreign tourist visit Rewalsar every year. Rewalsar need care for beautification so that more and more tourist visit here.

It was here that Lomas Rishi had meditated on Lord Shiva who, pleased by his penance, gave him the floating islands as reward. Of the three Hindu temples in Rewalsar, one is dedicated to Lomas. Rewalsar also has three buddhist monasteries replete with imposing murals in the Indo-Tibetan style and a gurdwara, which was built to commemorate the visit of Guru Gobind Singh , who stayed here for a month. The Sisu fair held in February-end or early March and the fastival of Baisakhi are the major tourist attractions. Tourist can stay here in HPTDC hotel or other private hotels and guest houses are available here.

Frequent bus services are available from Mandi, Sundernagar, Nerchowk, Sarkaghat, Kullu, Manali, Hamirpur and other part of Himachal. All major Govt department has there offices in Rewalsar. There is one private college and govt school and some other private schools available. market are available for all household items in Rewalsar. Once there was a small zoo maintained by HP Tourism, now zoo is almost vanished. 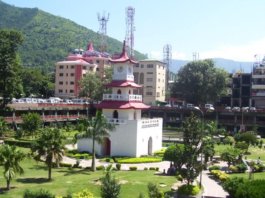