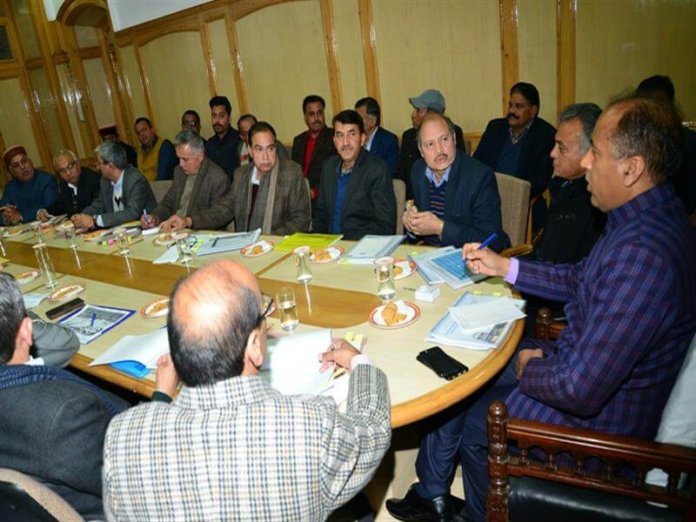 Shimla – While presiding over meeting of Hydro power developers and producers here today Chief Minister Shri Jai Ram Thakur assured the power producers that all their grievances would be redressed and resolved on priority. He said that Hydel generation was not only backbone of economy but also helped in generating employment. In past there was little progress in Hydel generation sector and process had come to a halt for quite some time. It is necessary to resolve petty issues of the Small Hydel Power producers to tap the potential of around 3000 MW as identified by small power producers.

Chief Minister said that effective measures will be taken to resolve long pending issues so that total potential 27,400 Mega Watt (MW) of identified Hydel potential in the state could be utilized. So far only 10,519 MW has been generated.

The Government was contemplating to make changes in Hydel Power Policy and it would be ensured that in the first stage clearances should be given without delay within one month by all concerned. Construction stage issues pertaining to tariff were to be resolved and in the third stage the post commissioning issues as deliberated upon can be taken up.

The tariff issue can be discussed with regulator and the tariff applicability from the date of commercial commissioning can be explored, he said. The No Objection Certificates (NOC) with regard to Forest Clearance, IPH department and other line departments will be speeded up said the Chief Minister.

MPP and Power Minister Shri Anil Sharma, said that the government will certainly take immediate measures to resolve the issues as discussed so that the clearances process, the tariff and royalty issues could be solved. He said that efforts would be made to bring changes in Hydro Policy.

President Himalaya Power Producer Association (HPPA), Shri Arun Kumar and President Bona-fide Himachal Power Developers Association (BHPDA) Shri Rajesh Sharma along with Chief Patron, BHPDA Shri R.K.Verma placed genuine problems being faced and pending since last 10 years. They said that presently there were very high royalty rates as compared to other states. They said that in Punjab the royalty rate was Rs 1.5 per unit, in Uttrakhand royalty rates are zero upto 15th year and 18 percent from 16th year and in Jammu and Kashmir these rates were zero for first 15 years and thereafter the rates were 12 percent from 16th year. Whereas in Himachal Pradesh the royalty rates were 12 percent for first 12 years and 18 percent for next 18 years and thereafter 30 percent for remaining 10 years, which was quite high, rendering projects economically unviable.

They also said that the tariff rates were too low as in Himachal they were Rs. 2.98 per unit after appreciated depreciation whereas Central Electricity Regulatory Commission had given the price for Himachal Pradesh as Rs. 5.07 per unit. In Punjab and in Uttrakhand this tariff is Rs 4.04 and Rs. 4.69 per unit, respectively.

They also complained about the complex procedure to get various clearances besides very high open access charges. They said that presently it was as high as Rs. 1.39 per unit as compared to other states. The access charges in Punjab was Rs. 0.57 and Uttrakhand, Rs. 0.69 per unit.

They said that tariff was not linked with commercial operation dates of the project besides there were very high transmission charges. They also urged for allowing power purchase agreement for 13 years to the period of loan repayment and subsequently the same may be continued or discontinued on mutually agreed terms as this will provide flexibility to both the parties. If above relaxation or recommendations were to be implemented there would be ample infrastructure development like roads, footpaths, bridges besides employment to the youth. As many as 1,68,464 job opportunities will be created during construction of the projects and as many as 14,000 permanent jobs. The tax revenue by way of GST would be around Rs. 3625 crore, they said.

Infrastructure In our Locality – Mandi