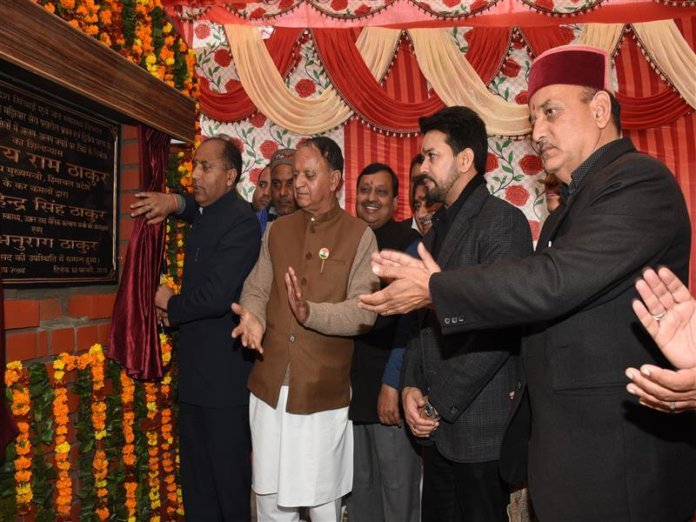 Hamirpur – Chief Minister Shri Jai Ram Thakur while addressing a massive gathering at Kangoo, in Nadaun Assembly Constituency of Hamirpur district today said that he feels pity on Congress leader for his statements in media, as he was expecting a lot from the Government during its mere 44 days regime. If we reverse the same question to the Congress which ruled the country for 50 years since independence, they won’t be able to give the satisfactory reply, he said. During the last 50 years of the rule of the Congress, it completely ignored the interests of the people of the country and played divisive politics of caste, region and religion, he said.

As far as Himachal was concerned, Chief Minister said that the last five years of the Congress regime seems to be limping on crutches and its leaders were involved in politics of vendetta. Their leaders during the last five years were seen more in courts defending themselves rather than devoting time for development and welfare of the people throughout. The Congress government was being run by tired and retired and not the Chief Minister, who was kept in abeyance regarding the political developments. These retired officials believed in sycophancy for their survival.

The Chief Minister said that now the Congress was blaming the present Government for giving extension to a few. ‘I want to make it clear to them that our government gave extension to Patwaris, so that the people does not face any problems in making essential revenue papers and certificates, said the Chief Minister. He added that the extensions were temporary and as soon the new batch, completes its training, they would be deployed.

Shri Jai Ram Thakur said that the Congress made several of announcements in haste and without making any budgetary provisions. They announced Tehsil in the areas, where Kanungo circles were required, they opened new SDM offices where tehsils were required and straight away announced or upgraded plus two schools where high or middle schools were demanded. There were no doctors in health institutes and not enough staff and teachers in schools. There were several schools where they were five teachers for two students and many schools even lacked basic infrastructure. Retired officers hired by Chief Ministers Office ruled the roost in Congress regime. I presume that the Congress was not able to digest the defeat and were issuing statements out of mere frustration, said the Chief Minister.

The Chief Minister said that it was pathetic that since 2011 no Chief Minister came to this area and the Congress completely neglected the development and welfare of the people of Nadaun constituency. He said that the present Government would leave no stone unturned for development of the area. We will not work like Congress by making online announcements, inaugurations and laying foundation stones without budgetary provision.

He reiterated his resolve to completely wipe out Mining, Drug and Forest Mafia from the state and mentioned about the Guddiya and Hoshiyar helpline i.e. 1515 and 1090 respectively, besides launching Shakti App for safety and welfare of women.

He said that the previous government had left financial debt of Rs 46,500 crore, yet he personally believes that the Prime Minister Shri Narendra Modi will help the State to come out of this debt. He said that the State BJP will give it best show in Lok Sabha elections in 2019.

It was the first visit of Shri Jai Ram Thakur to Hamirpur district after becoming Chief Minister. He said that former Chief Minister Shri Prem Kumar Dhumal had an important role to play in the Party and he will be the guiding force to all of us.

The Chief Minister also inaugurated a 170 metre span bridge over Maan Rivulet completed with an outlay of Rs 8.60 crore. He also laid foundation stone of Rs. 5 crore Lift Irrigation Scheme Majhiar-Sera-Pakhrol. The Scheme envisages to construct as many as 30 water storage tanks to ensure assured irrigation facilities to the people around the year and particularly during summers. This will benefit 24 villages of the area providing irrigation facilities to 1000 hectare of land to be lifted from Beas river.

The Chief Minister directed for providing twenty-four hour indoor facility in Kangoo Primary Health Centre with doctors on duty for which all efforts would be made.

He announced that adequate funds would be made available for constructing a bridge over Battaran-Gwalpathar Link Road at Hathol over Mann Rivulet. He also directed for preparing Detailed Project Report for a bridge over Kunnah Khud for which adequate budgetary will be made.

Member of Parliament Shri Anurag Thakur while addressing the gathering said that the conditions of the roads in this belt was very bad and needs to be improved. He said that though he contributed a lot from last 10 years from his MP fund for various constituencies of the district yet a lot was to be done.

He said that survey of 50 kilometres Una-Hamirpur rail line was done way back but the Congress ever criticised the move and I want to tell them that a provision of sum of Rs 102 crore had been made for the same and Rs. 8 crore has been released. He said that the BJP intends to improve the rail connectivity Una-Nangal-Talwara rail line has also got the funds amounting to Rs. 80 crores for completion of its around eight to ten kilometres of length in Himachal Pradesh. Efforts were afoot to get adequate funds for Bhanupalli-Bilaspur-Leh rail line which was important from strategic point of view. As of now, a provision of Rs 120 crore has been made for this strategic rail link, he said.

He said that he was ready to set up shooting range in all his 17 parliamentary constituency from his MP fund and urged to get the No Objection Certificate from the schools where these shooting ranges would be constructed.

He said that a Scheme was in offing to provide sanitary napkins to the school girls between 10-19 years of age and urged Mahila Mandals for their assistance in this regard. The entire expenditure will be met from MP fund, he said. He urged the Chief Minister to ask the authorities to properly maintain all roads in the constituency as well as in the district.

Former MLA Shri Vijay Agnihotri welcomed and honoured the Chief Minister on the occasion. He said that the medical college would be constructed where the land had been selected for the same. He urged for improving the conditions of road in the constituency. He credited the development of the area to BJP government since 1998, adding that the congress whenever in power neglected the district completely. Besides, the Panchayat representatives, Mahila Mandals, Yuvak Mandals from the region also welcomed the Chief Minister.

He also demanded upgradation of Primary Health Centre Kangoo besides other demands.

Shri Prabhat Choudhary from Tappa Khola contributed a sum of Rs. 1,01,000 towards the CM relief fund.